To close this gap, we suggested transferring the concept of Code Smells to the domain of EA Debts. The main goal of EA Smells and their automated detection is to increase the qualityof EAs and the awareness for common bad habits. Therefore, EA Smells reflect quality flaws in the EA itself. However, if the EA model is used as an input to determine the EA Smell, the smell might only appear in the model and not in reality, based on the on the degree of how the model reflects the reality.

We developed a catalog of EA Smells, on that developers can rely on it during the design process or even afterwards while doing performance monitoring to assess the quality of data in EA repositories. Sophisticated tools for automated detection can then provide a convenient risk detection with built-in solution suggestions.

EA Smells are an indicator or symptom of EA Debt, working like a metric to rate the quality of data and estimate parts of the EA Debt in an EA Repository. This represents a valuable usage of the EA Debt concept, even though EA Smells are just a subset of the overall EA Debt. For example, such an EA Smell could be a bloated service that has one large interface with many parameters or requires much data and performs mostly heterogeneous operations with low cohesion. 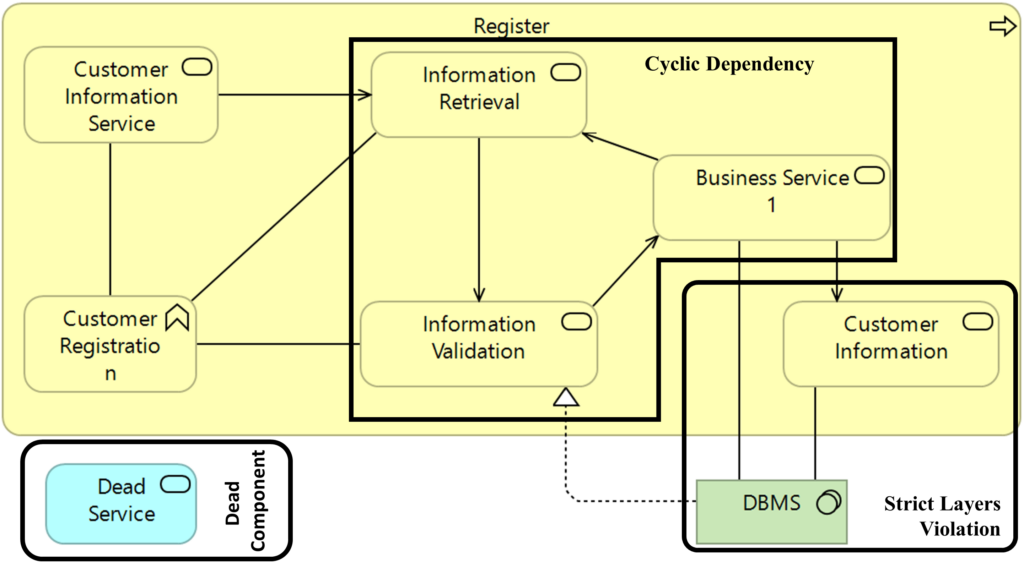 Above figure illustrates three examples of EA Smells in an EA model. Firstly, a Cyclic dependency in which three services build on each other. Secondly, a Dead Component, which has no relations to the rest of the model. Lastly, a Strict Layers Violation where elements of the business layer are directly linked to an element of the technology layer.

Software Architectural Smells (SA smells) are design problems in the internal structure and behavior of an SA. These can be seen as a specific category under the umbrella concept of Technical Debt (TD). TD is a central concept in software development projects and having the means to detect and measure the smells is important to understand impairments they may cause. However, TD is only limited to the technical aspects and does not describe smells found on an enterprise level. Enterprise Architecture Debt (EAD) expands the concepts of TD beyond the technical aspects such that it covers the debts that can be found in all layers of an Enterprise Architecture (EA). EA smells give a measurement for EAD, by providing means for detecting the smell, hence enabling a method to quantify the level of debt. The goal of this paper is to find EA smells derived from existing SA smells. This has resulted in three new EA smells that could be used as measurements for the quality of an EA. They can also be used in the future as a basis for automatic EA smell detection.

IT processes constitute the backbone of an integrated enterprise architecture (EA). The model thereof sustains the development and management of the EA. Nevertheless, the quality of such models tends to degrade over time due to, e.g. improper modeling practices or ineffective evaluation. In this regard, the knowledge of relevant modeling anti-patterns can help identify, mitigate, and prevent the occurrence of sub-optimal or adverse constructs in the model. In the field of business process modeling (BPM), a plethora of BPM anti-patterns has been defined and compiled in various taxonomies. However, these BPM anti-patterns mostly focus on technical issues, which thus are applicable for evaluating workflows but not EA-level processes. We strongly argue that the concept of process anti-pattern in EA domain can facilitate EA analyses on process-related issues. To address this gap, this paper presents a catalogue of 18 EA process modeling anti-patterns, which we derived from the existing BPM anti-patterns. Our result should serve as food for thought and motivation for future research in this context.

Towards a Catalog of Enterprise Architecture Smells Incollection

Code Smells are well known in the domain of Technical Debt (TD). They hint at common bad habits that impair the quality of the software system. By detecting those smells it is possible to suggest a better solution or, at least, make the developers aware of possible drawbacks. However, in terms of Enterprise Architecture (EA), which is a more holistic view of an enterprise including TD, there does not exist such a concept of EA Smells.
Such EA Smells can be a component of EA Debt, working like a metric to rate the quality of data and estimate parts of the EA Debt in an EA Repository. The main goal of this work is to start the development of a catalog to facilitate future design and development of EAs. This catalog should be expanded and serve as food for thought to create a corresponding tool for the detection of smells.

We are happy to conduct the second student conference on enterprise architecture debts. The conference will be online again and

Presentation for EA Smells based on Software Architecture Smells