Naturally, with the increasing complexity of the modeled system under study, also the complexity of the model itself increases. Although EA modeling is widely adopted in industry and much research is conducted in the field, the analysis of EA models is surprisingly underrepresented. Generally, two analysis approaches can be distinguished: manual and automated. Given the discussed complexity of EA models, manual analysis can be error-prone. Automated model analysis can mitigate this problem by scaling well and by providing interactive analysis means that extend static ones.

We analyze automatically and efficiently even large EA models with the aim to detect EA Smells. Generally, a smell describes a qualitative issue that effects future efforts (e.g., maintenance) and not the functionality. While Code Smells analyze source code, EA Smells analyze an organization from a more holistic point of view and go beyond a technical scope.

To allow the analysis of other EA models than ArchiMate and to realize a scalable approach, we generalize the EA model to a Knowledge Graph (KG) and provide queries representing respective EA Smells. Hence, the detection of EA Smells can be applied to all EA models, which can be represented as a KG. We propose a generic and extensible platform that facilitates the transformation of EAs into KG representations. The platform can be easily extended to support further modeling languages. Once a transformation is realized, the existing EA Smells queries can be efficiently executed even on very large models and model corpora. 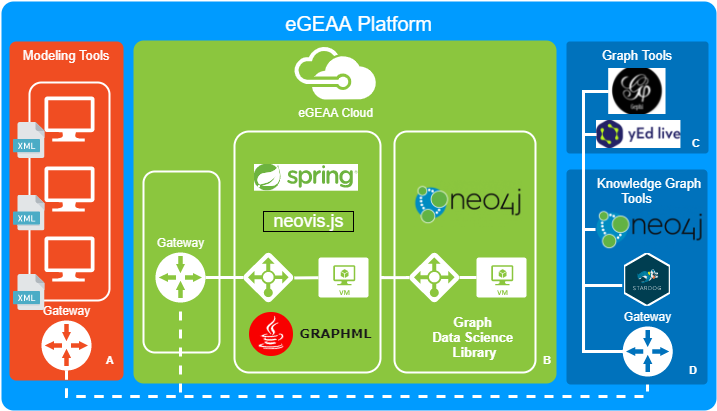 The core platform (see figure above) allows the transformation of ArchiMate models into graph structures. We enhance this platform with the capability to transform EA models conforming to the Open Group Exchange format to a KG. Further, we enhanced the platform by means of semantic queries to automatically detect EA Smells.

Hitherto, the concept of Enterprise Architecture (EA) Smells has been proposed to assess quality flaws in EAs and their models. Together with this new concept, a catalog of different EA Smells has been published and a first prototype was developed. However, this prototype is limited to ArchiMate and is not able to assess models adhering to other EA modeling languages. Moreover, the prototype is not integrate-able with other EA tools. Therefore, we propose to enhance the extensible Graph-based Enterprise Architecture Analysis (eGEAA) platform that relies on Knowledge Graphs with EA Smell detection capabilities. To align these two approaches, we show in this paper, how ArchiMate models can be transformed into Knowledge Graphs and provide a set of queries on the Knowledge Graph representation that are able to detect EA Smells. This enables enterprise architects to assess EA Smells on all types of EA models as long as there is a Knowledge Graph representation of the model. Finally, we evaluate the Knowledge Graph based EA Smell detection by analyzing a set of 347 EA models.

We are happy to conduct the third student conference on enterprise architecture debts. The conference will be online again and

Presentation at EMISA 2022 in Luxembourg

Presentation for EA Smells based on Software Architecture Smells